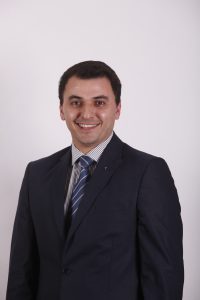 Michael Germi is currently on leave from his ministries at Liberty Baptist, preaching Gospel messages in the US to be aired over satellite TV and radio into Iran, Afghanistan, and Tajikistan. He is also pursuing his Masters in Bible Translation through Baptist Theological Seminary out of Falls Baptist Church.

Michael Germi was born and raised in a Muslim family in Iran. He migrated to Australia in 2006 with a work and holiday visa. After three years living in Sydney, Michael was invited to church through his Christian friend. Michael didn’t accept his friend’s invitation as it would have been disrespectful to his own religion, but after his friend’s insistence, and a need for an Australian visa, he found excuses to attend a church.

When Michael walked in the church for the very first time in his life, he was so amazed and surprized to see how Christians worship with joy, singing and praising God. He was amazed to see the purity and integrity of Christians as contrasted with what he had heard about Christians back in his home country.

Michael was able to purchase a Bible and start reading it for the first time in his life. Reading the Bible, he realized that the Bible was not powerless and vain as other religious books. He acknowledged that there is the answer in it for life and it could change his life. The Bible was so precious to him that he read it for many hours each day. He was able to read through the Bible once in three weeks. The Bible was satisfying his soul and mind, but he was not sure how he could be sure of his eternal destiny, until he met Keith Piper, pastor of Liberty Baptist Church in North Rocks who told Michael out of the Bible how he could be sure of going to heaven. Hearing the gospel, Michael acknowledged his sinfulness and realized that Jesus Christ died on the cross to pay the penalty of his sins. Michael received Jesus Christ as his personal Saviour on the 29th August 2009 claiming Romans10:13 and John1:12 and everything changed in his life after that.

Michael surrendered his life to the Lord Jesus for ministry on the very first day of his salvation. The Lord started to lead and direct him and called him to study theology at SBBC (Sydney Bible Baptist College) to prepare for ministry. After four years studying hard, Michael was able to graduate from Bible College in 2014.

Currently, Michael serves at Liberty Baptist Church in North Rocks as a preacher and he ministers to Farsi speaking people in Sydney. During Pastor Piper’s Bible studies he interprets the lessons from English to Farsi so Farsi speaking people can understand and be edified. Michael has written two Christian books, “Learn Of Me” and “Sweeter Than Honey”. Michael’s vision is to preach the gospel to his own people and others in person as well as through media so that they can come to know Jesus as their Saviour and have eternal life.